A space in time, seemingly etched out of eternity. In that moment when Heaven meets destiny… a vision is birthed. A purpose revealed. A dream conceived. It is those moments the Greek word Kairos refers to. It’s meaning is “the appointed time in the purpose of God”, the time when God acts.

We all have these moments, whether we recognize them or not. If you take the time to pause and think back over your life, there are situations that stand out to you. It could have been an ordinary, mundane day- you were going through the motions and then suddenly something stands out. You are remembering a significant moment. A God-moment. I want to share with you a God-moment that I had shortly after I married Charlie (my super amazing preacher-man husband).

It’s Friday night, around 8 pm. I’m 22, and newly married. Instead of heading out to the movies or a dinner date, we headed to a prayer meeting. I had been to several prayer meetings up to this point in my life. Some in the wee early hours of day, when I am sure not even the angels are awake. They were quiet, peaceful and most of us laid prostrate on the floor… seeking our sleep rather than our God. Then there was the ones I went to in college. These were vivacious, as the exuberant prayers of young preachers, teachers and students would rend the barrier between Heaven and Earth creating an atmosphere filled with electric faith.

I had even been to this church’s prayer meetings before, and as we were on our way I expected the kind where each person would take the microphone and pray; declaring and decreeing, prophesying over the specific topic they were assigned. This was not the case for that night. It was to be a God-moment, an encounter that branded me. Like the heated metal of a branding rod, the fiery embossing mark of God would forever be seared into my heart.

As I sat in my chair, lights dim and others spread about the room, I began to seek God.

Previously that night, Charlie and I had a conversation discussing Acts 2 and what we knew of the Baptism of the Holy Spirit. We both grew up in Pentecostal homes and churches, and both at young ages received the baptism with the evidence of speaking in tongues. But where was the evidence of the fire? This is what puzzled us that night, what drove us to a place of desperation in God.

Luke 3:16-17 states, “John answered, saying unto them all, I indeed baptize you with water; but one mightier than I cometh, the latchet of whose shoes I am not worthy to unloose: he shall baptize you with the Holy Ghost and with fire: Whose fan is in his hand, and he will throughly purge his floor, and will gather the wheat into his garner; but the chaff he will burn with fire unquenchable.”

So there I sat, deliberate in my petition before God. My face as flint. I would have the fire.

May I remind you that in a place of desperation, a place of an earnest heart, you don’t care what others think. You only care for what your eyes are fixed upon, and mine were stayed upon what Revelation 1:14-16 describes here; “His head and his hairs were white like wool, as white as snow; and his eyes were as a flame of fire;And his feet like unto fine brass, as if they burned in a furnace; and his voice as the sound of many waters. And he had in his right hand seven stars: and out of his mouth went a sharp twoedged sword: and his countenance was as the sun shineth in his strength.”

Momentarily I found myself on the floor, somehow pinned there. Lacking the ability to move, to even control my hands and arms. I was frozen stiff at the burning feet of God. It was then, a wave of intense heat came rushing over me and in a panic I helplessly tried to wriggle out of the heavy sweatshirt I was wearing. It felt as if molten lava was pumping through my veins, taking its course through out my body and purging my soul. Like the Prophet Jeremiah who declared, “His Word is in my heart like a fire. It’s like a fire shut up in my bones! I am worn out trying to hold it in! I can’t do it!”

I too could not keep it in.

I’m not going to pretend that was the most delightfully pleasant experience ever in God, because it wasn’t. It hurt. Yet it was necessary. It was the very thing I was seeking; an encounter with a living God that would burn so deep his love for me that I would forever be changed. It was the Baptism of Fire.

So tonight, as you read this. You might think this all a bit too strange. Or you may just be daring enough to stop playing patty-cake and have a real experience with the living God. You may need a supernatural encounter with Him, to know he is real. He is alive and he loves you with an everlasting love. 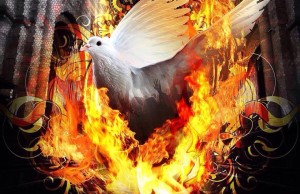 2 thoughts on “Baptism of Fire”