Tomorrow I start a new chapter in life. A journey to an unfamiliar place… packing up my world for a few months and heading to the UK & Europe. Some of the countries we will be visiting are England, Scotland, Ireland, Germany and France. What was only a dream is now reality and I’m gonna write all about it!!

I can’t wait to start this adventure with my hubs and 2 lovely kiddos. It hasn’t been easy, but there has been an ease to the planning and preparing for this special time.  This is something I have learned over the past several years serving God, if HE is in it, there is an ease to it and there’s no striving involved. So I rest in Him, knowing that we can plan as much as we want, but when His hand is on it- there’s no need for mine.

Last April, I had the wonderful opportunity to travel with Charlie to England for what was my first trip. Although he had been there several times before, this was the first time I felt it was imperative that I join him. I was there April 17- 22, 2014. On a Saturday afternoon, as we ministered in a place called Jacob’s Well I saw a vision during worship. What I saw was a great shaking in England and the blood of the martyrs (the revivalists and believers that have gone before us and laid down their lives for the Gospel) rising from the ground. As it rose, the rains from Heaven began to pour with the weight of God’s presence. Mid-air the droplets of blood and water collided, instantly transforming into golden drops. These liquid drops of golden glory fell back to the Earth, covering the ground- saturating the land. It was a declaration and confirmation that God’s glory was about to cover the Earth, but first a shaking was going to take place.

Later that evening when I returned to the hotel room, I had the image below with a news link on my Facebook page, asking if we were alright. Unbeknownst to me there had been a double earthquake in England during the time we were there! God was truly speaking about what would surely take place. 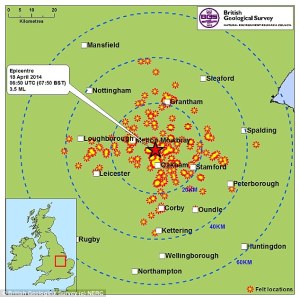 So as we embark on this journey over the next few months, we tuck deep into the folds of our heart the promises of God. Intercessors in both England and America have been praying and paving a way in the spirit for our family and team members who are going with us. Not only that, but there has been years of intercession over this land for another great awakening and revival of God’s presence. We are believing for just that and are honored to be a part of what God is already doing there.

On both March 21 & 22, 2015 well-known Prophet Kim Clement released a word from London, England. (click image for full word posted to www.kimclement.com) Here is a hi-light:

“Can Britain be great again is the question that has come before Me, says the Lord. Can I flame Europe once again with a flame of delight for My son? Yes is the answer…. Something is happening NOW and so as a prophet I pray and Lord I tear down the powers of hell and darkness that have come against this nation, against your people. So Father I pray present this to your people tomorrow and let Iran not stand and Lord let your people stand and let the blood of those that have been martyred cry out, Victory, to cry out of better things than that of Abel.“

Yet above all, let it be known that everything we do in life, we do it for Love. For God is Love.

“This is how much God loved the world: He gave his Son, his one and only Son. And this is why: so that no one need be destroyed; by believing in him, anyone can have a whole and lasting life. God didn’t go to all the trouble of sending his Son merely to point an accusing finger, telling the world how bad it was. He came to help, to put the world right again. Anyone who trusts in him is acquitted; anyone who refuses to trust him has long since been under the death sentence without knowing it. And why? Because of that person’s failure to believe in the one-of-a-kind Son of God when introduced to him.

“This is the crisis we’re in: God-light streamed into the world, but men and women everywhere ran for the darkness. They went for the darkness because they were not really interested in pleasing God. Everyone who makes a practice of doing evil, addicted to denial and illusion, hates God-light and won’t come near it, fearing a painful exposure. But anyone working and living in truth and reality welcomes God-light so the work can be seen for the God-work it is.”

4 thoughts on “A New Chapter”