As the airplane screeched to a halting stop, I breathed deeply.

My husband, who had been fast asleep for majority of the 13 hour journey, gazed over to me and lovingly said, “Welcome Home, Brynn.”

A moment that had hung in the stars for over a decade collided with Earth’s knowledge of time and we stepped into destiny; placing both feet on the ground in Beijing.

Let me go ahead and say that again… We stepped off the plane and onto the martyr’s blood-stained land of China. The 7,013.7 miles away from my two children, China. A land that missionary forerunner, Hudson Taylor, gave over 50 years of his life to, China. That is where I stepped, when He turned and whispered those words of invitation and comfort.

You see for nearly the entirety of our marriage and even before hand we had discussed a vision and heart we both had for the Asian nations of the earth. To proclaim and preach the saving Gospel of Jesus Christ to the unreached people groups of the 10/40 window. At last, a dream was becoming a reality.

Early on in my life, as a young seventeen year old, I spent the summer before my Senior year of high school in China and Hong Kong. In fact, it was because of this trip to China that I based my college decision on. Which in turn lead to my heart for Missions growing, expanding and engulfing all my major decisions for the next few years to come.

I had walked the streets of Beijing, stood at the great monument in Tienanmen Square, prayed to my God in the midst of Buddhist temples and climbed the Great Wall of China. All the while declaring Joshua 1:3, “I will give you every place where you set your foot, as I promised Moses.”

See, I had been here before.

Fourteen years later I was returning with my husband to minister and fulfill a mandate and promise God had placed over our lives. We spent the next 8 days going full-force, non-stop with no time for jet-lag to set in. Though at times I truly felt like the walking dead; a zombie of sorts, not knowing what time it was nor where I was… This gave me even greater appreciation for my husband who travels every weekend out of the month changing time-zones regularly.

The morning after our arrival was a particularly special time for me on this trip. My dearest friend of over 10 years, Rachel, was able to be in China at the same exact time I was with only a few days overlapping! Aside from the conference Charlie and I were ministering at, the ladies had gathered in a home for a time of ministry, lattes and cheesecake. That’s right, cheesecake! Rachel had ministered at the Women’s Tea the week before and so there was already an expectation in hearts.

As I reached for my Bible, and asked the ladies to turn to Psalm 139, the room filled with laughter. I thought… what just happened? Unknowingly, I had asked them to turn to the exact scripture Rachel had shared from the week before. The key verses out of this passage that the Lord had been highlighting the weeks before this trip were found in verses 15 – 17.

“My frame was not hidden from You when I was being formed in secret [and] intricately and curiously wrought [as if embroidered with various colors] in the depths of the earth [a region of darkness and mystery]. Your eyes saw my unformed substance, and in Your book all the days [of my life] were written before ever they took shape, when as yet there was none of them. How precious and weighty also are Your thoughts to me, O God! How vast is the sum of them!”(Psalm 139: 15-17 AMP)

God kept saying to me over and over again, “Destiny scrolls, destiny scrolls, go and unlock their destiny scrolls.” I thought to myself, okay… what does that even mean? This is when Psalm 139 began to explode inside of me as I meditated on how much God loves each one of us and has created us in our uniqueness. He has written His thoughts about us even before our days began. Wow! I had to sit there a moment and actually re-read this passage. Not because that part of scripture is new to me, but rather because, I was reading it in a new light with clearer vision.

I shared this with the women and we began to worship God, diving deep into his Love, soaking up his presence and asking him to reveal our true identity and destiny. The atmosphere in that small living room was electric, weighty and bursting with purpose… everyone there was touched by the power of God. Some had visions, others were in trance like states, still some weeping with tear stained cheeks. Yet there were those of us bubbling over with so much joy we could not keep our laughter in.

In the midst of all this, the most powerful moment that happened was the salvation of a young Chinese woman. She shouldn’t have been there. In fact it was illegal, but there she was anyway.

It was then that The Divine pierced the veil of time, penetrating a fog of illusions that had left her in a haze, and grabbed hold of her soul refusing to recoil. He cloaked her with Mercy and kissed her with Grace. It was a transaction so precious and I was honored to simply be a part, a witness to God’s furious love. 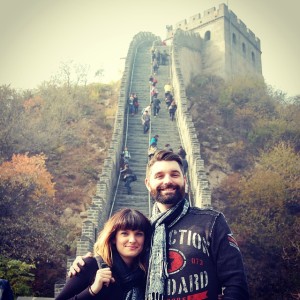